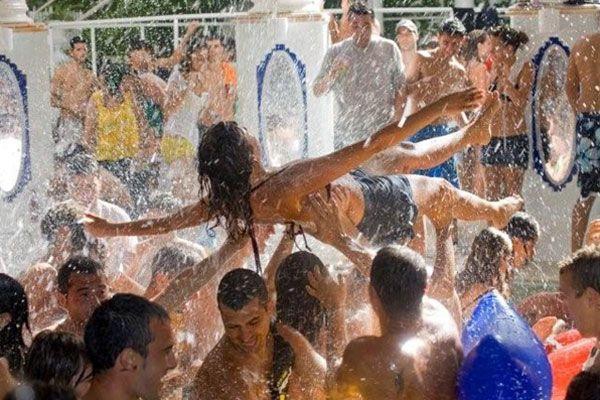 Originally an open air venue, the imported roof proved to be a highly successful and innovative way to combat the noise legislations that were enforced on the island in 1990. A thriving decade followed where party goers revelled in this truly unique setting.

Nowadays, Es Paradis proves to be equally spectacular with great marble columns and giant palms reaching up to the glass roof above. Although some argue that such décor is a slightly outdated within this modern clubbing era, no one can doubt the venue’s extravagance on which it thrives upon. Attracting a predominately British San Antonio based crowd, Es Paradis and its infamous ‘Fiesta del Agua’ water parties have experienced continued success over the past decade. The highlight of these nights comes to a head at dawn, when the club’s main room is flooded, consequently transforming the dancefloor into a swimming pool.

The club’s ten bars are set over two floors with the top floor featuring a spectacular fish tank that consistently continues to impress the club’s clientele, and a partitioned area offering alternative music. Although its popularity has suffered a touch over recent times, one thing for sure is that Ibiza’s second oldest club will soon bounce back with something fittingly spectacular in the near future.