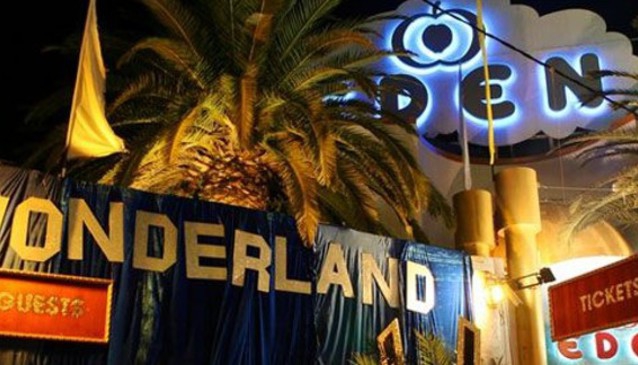 It was not always this way, and had it not been for major redevelopment in 1999, it is likely that the club would have ceased to exist. At least, it would not be boasting the international reputation that it does, and the superstar DJ line-ups that it has. Now in its 10th year since the renovation, Eden has maintained its hip new look and, perhaps as a result of this, its supremacy over next-door neighbour, Es Paradis.

Lit up like a Christmas tree at night, Eden is clearly visible from the surrounding area, although perhaps not as spectacular as the glass pyramid of Es Paradis. The interior is generally uninspiring, operating a minimalist disco theme, but the profusion of bars, stages and podiums keep things interesting. There is a VIP room housed on the wrought-iron balcony above the main room, and hidden through the back is another large space where the sounds are generally more diverse than the hard house spinning in the main DJ booth.

What you cannot help but be impressed by is the sound and lighting systems that have been installed in Eden. It was this that put real weight behind the nightclub’s bid to become a force amongst Ibiza’s megaclubs, and probably what has led to attracting such names as Radio1 DJs Dave Pearce and Judge Jules. Now, hugely popular with its largely British crowd for producing nights full of party anthems and ecstatic partying, Eden stands out as one of the most sought-after venues for the big promoters.

Check out the lineup of the Ibiza Live musical madness this summer at Eden and keep an eye on our Fanpage to win VIP tickets to WRETCH 32 in August!