A Walk on the Wild Side in Ibiza

...engravings and sculptures adorn the Ibiza rock...this place is magical and otherworldly.

Whether you are an avid hiker, a casual rambler or just enjoy getting out for a bit of fresh air with the dog, walking tours are one of the best things to do in Ibiza.

My Guide followed a trail with Walking Ibiza to discover a Pirate tower with a view to Es Vedrá, a slippery slope leading to Atlantis and just how long the walk back up could actually take.

Our walk started with the Walking Ibiza group gathering on a camino near Cala D’Hort. The group of 20 or so people marched off, immediately separating into 2 distinct groups, with the chatty girls and I bringing up the rear.  We quickly realised we were off pace when we hit a T Junction and the main group was nowhere in sight.  A quick call got us back on track and heading in the right direction, 2-way radios were issued to a rear guard and we were set for success.  After a brisk 10 minutes we took a break on a dramatic cliff top looking out over Es Vedra. Here Toby, our guide, enlightened us to the deep channel bringing cold currents into the bay and conveyed stories of a cave running straight through Es Vedra, mystical magnetism and hill billy goats that seem to have adapted quite well to this rock, dramatically rising out from the ocean floor.

With the rising winter sun creeping over the ridge in front of us it was time to head for the Torre d’en Pirata (Torre des Savinar). This climb took us several 100 metres up to the top of the ridge revealing the tower which is one of 5 on the island constructed between 1756 and 1763. A network of these towers is dispersed across the island and served as the early warning system for the imminent arrival of Turkish raiders after the island's salt haul and in later years marauding pirates. Once spotted from one of the towers the unwelcome visitors would be welcomed with smoke signals sent from one tower to the next, alerting the islanders to lock up their goats and daughters and finish the Hierbas…the pirates were coming.

While the visit to the Pirate tower held none of this drama in store for us, the view over Es Vedra was a must-see and still as utterly breathtaking as it has always been. Access to the Tower is easy to find and the tight winding staircase, takes you straight to the top of the viewing platform.  With walls nearly 2 metres thick at the top, it is safe to say, these towers were built to last. A peek over the side towards the East gave us a hint of what was still to come.  The rock pools of Atlantis lay glistening far below and the group prepared to traverse the ridge and start the climb down to the quarry. 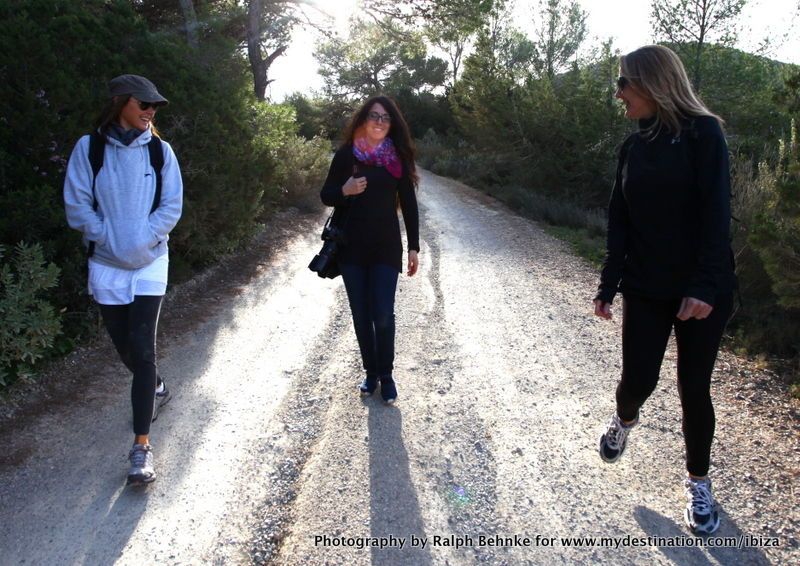 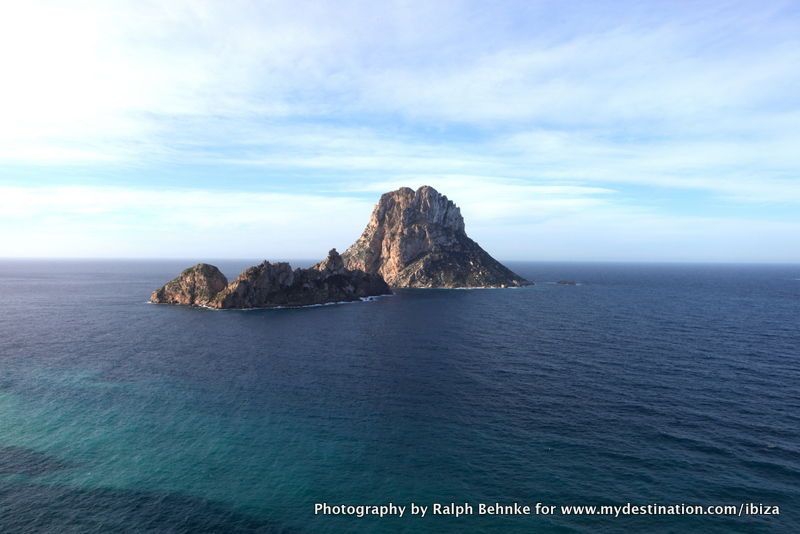 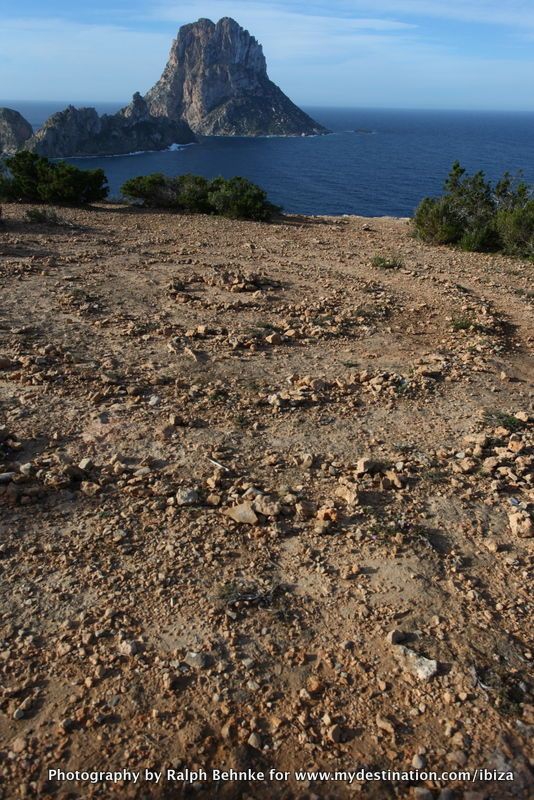 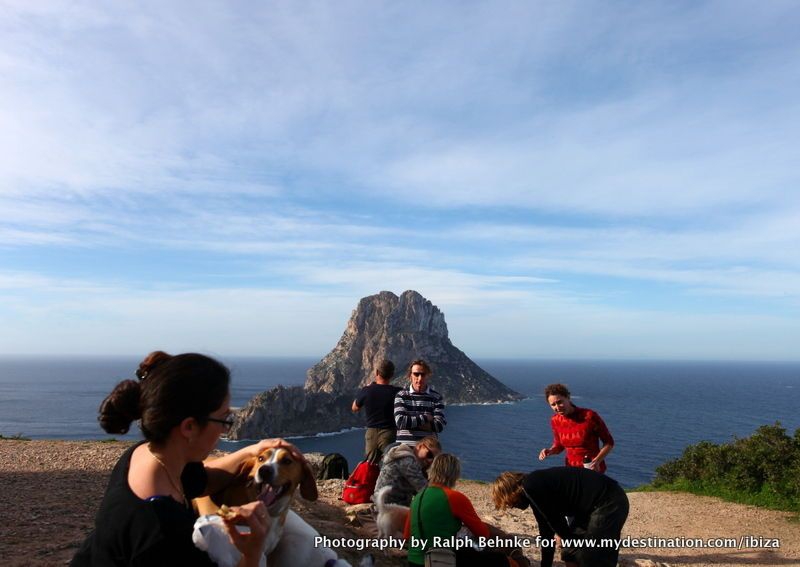 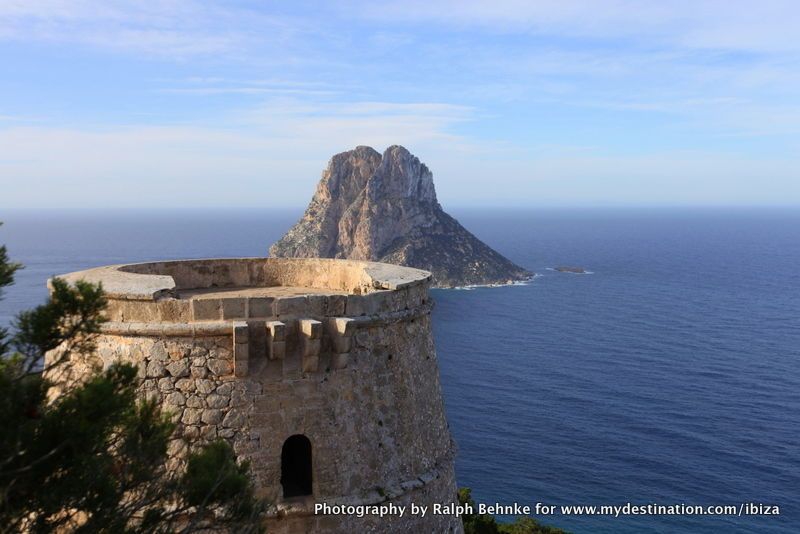 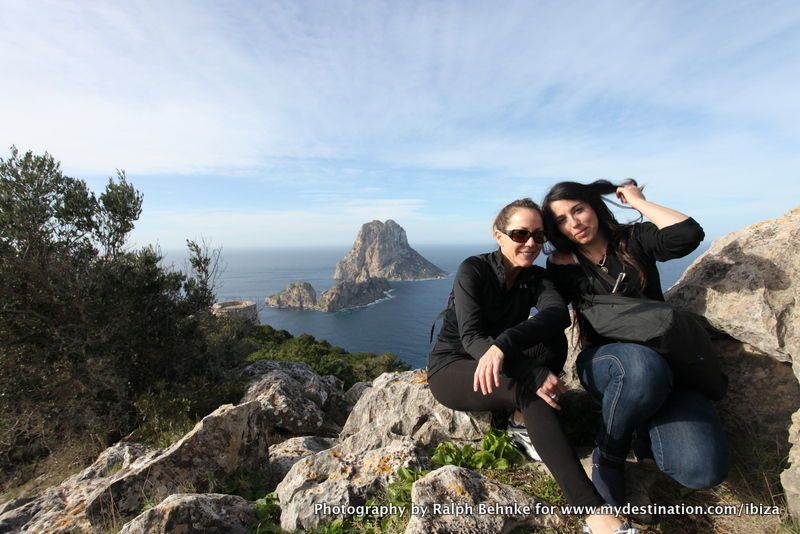 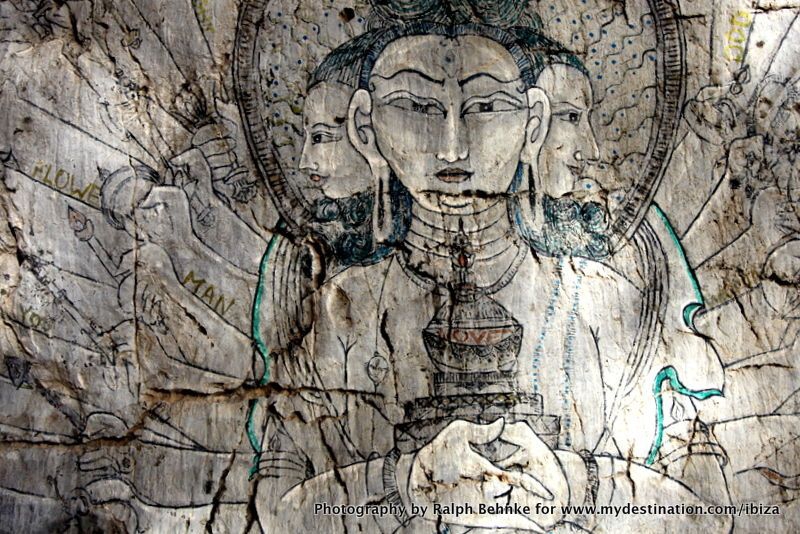 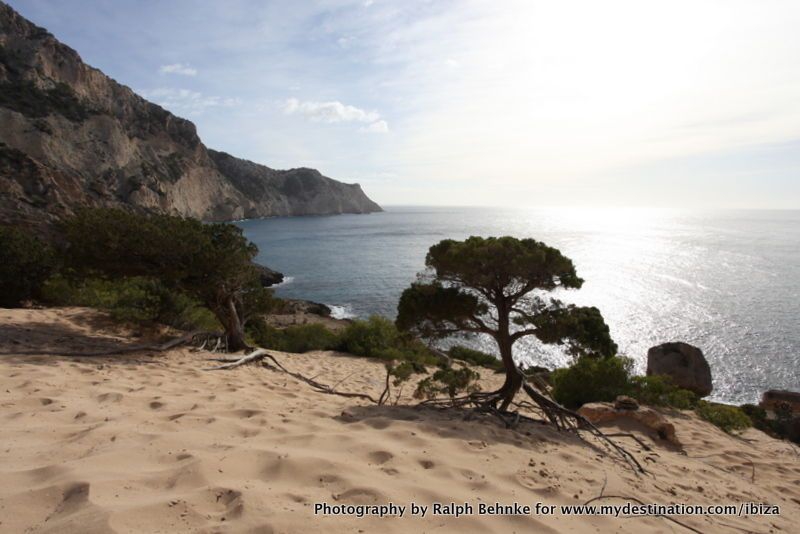 While rock quarries in general are not the kind of places that most sane people usually venture down a mountain for (not to mention the return journey), Atlantis is different, Atlantis beckons you. The baron sandstone devoid of plants and gleaming with 2 beautiful rock pools at the waters edge, make you feel more like you are on a Mars beach club (the Blue Martian perhaps) than on our usually green and lush Ibiza.

Countless engravings and sculptures adorn the Ibiza rock here, and the numerous stone towers stand as a testament to man’s love for piling rocks on top of each other. It is hard to imagine what this place looked like before they started cutting the rock out for the walls of Dalt Vila. But rather than leaving behind a scarred barren land, this place has been transformed into something magical and otherworldly. 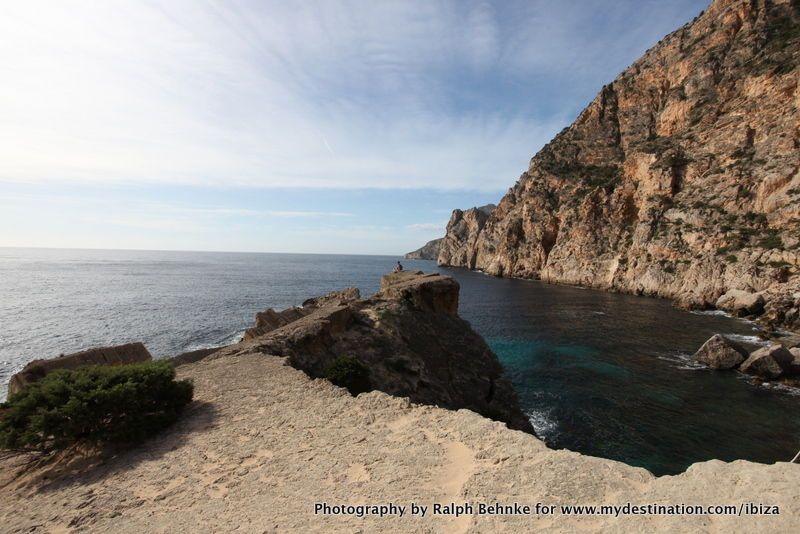 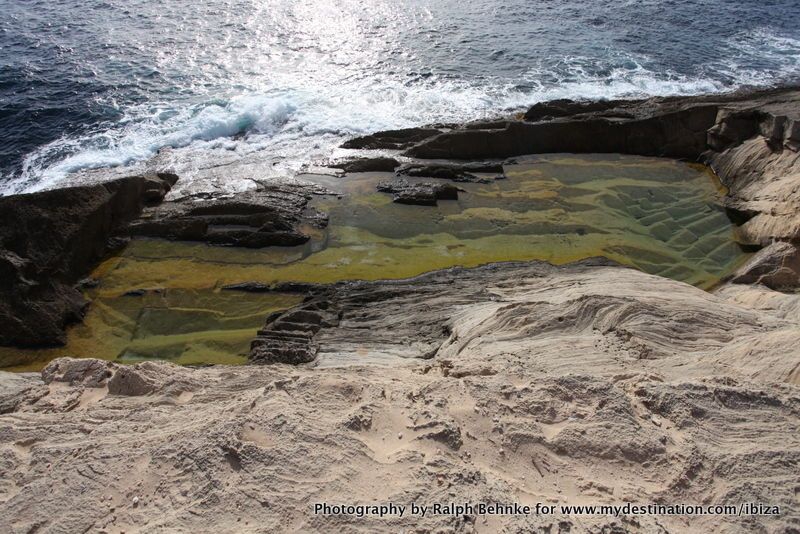 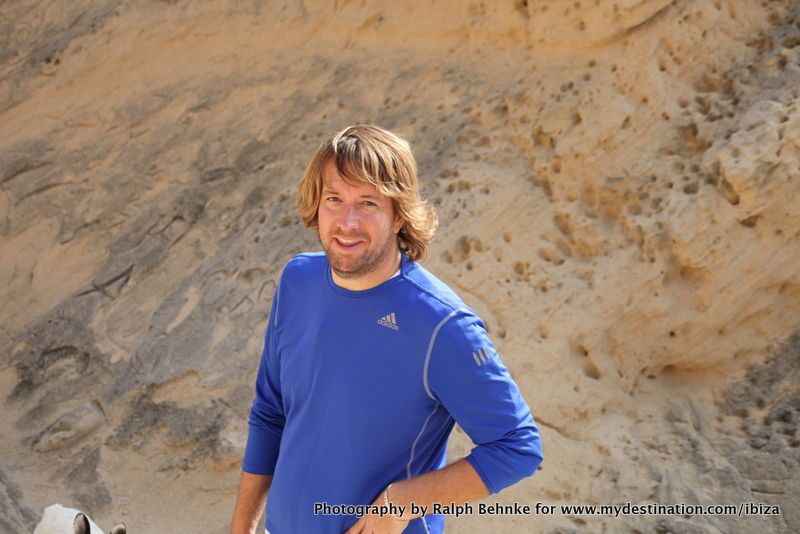 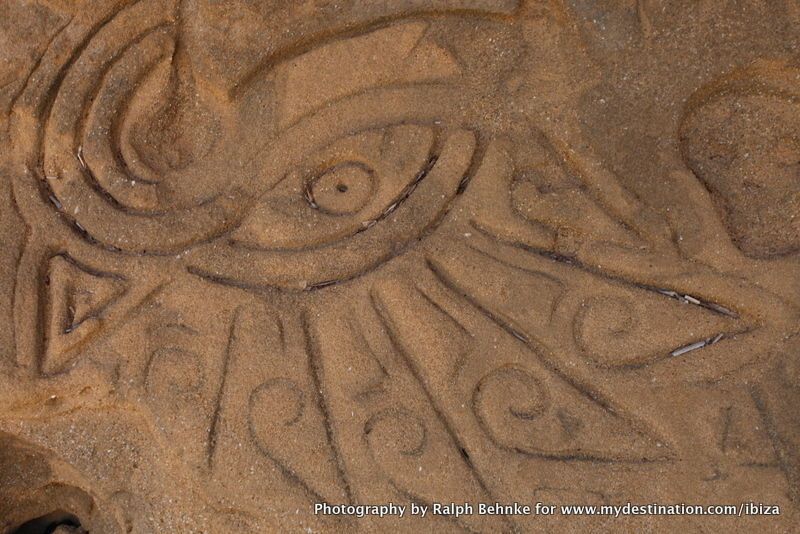 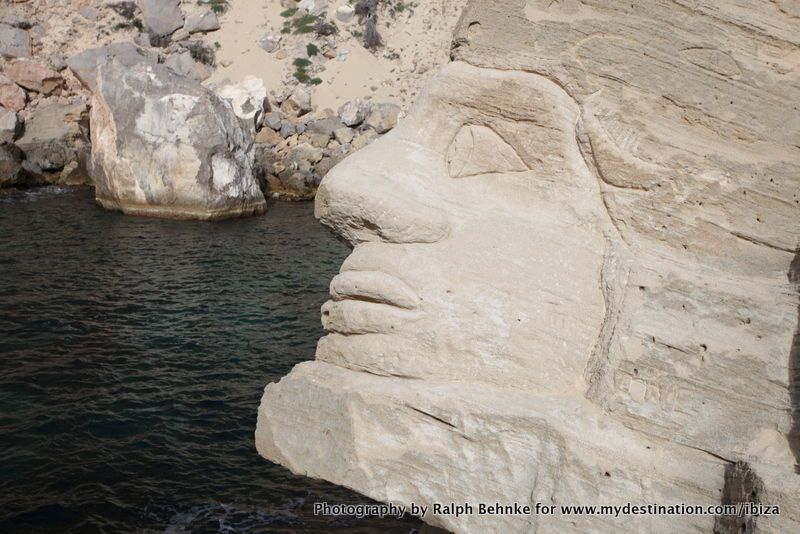 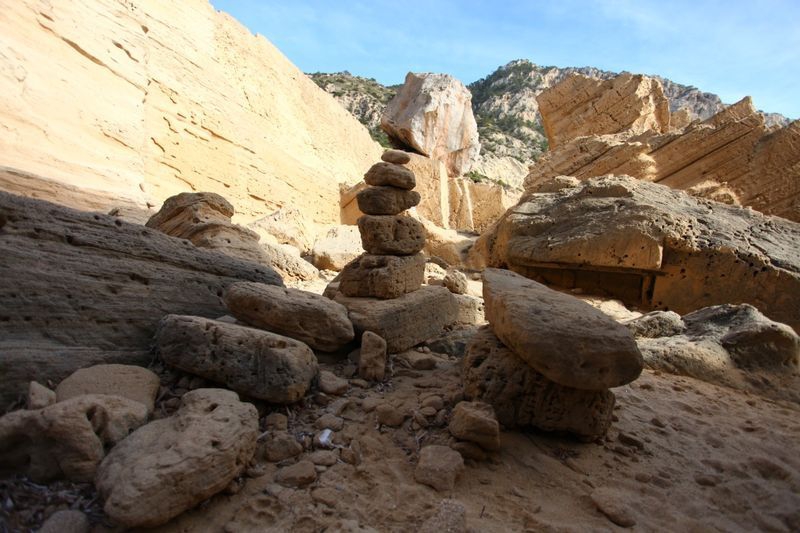 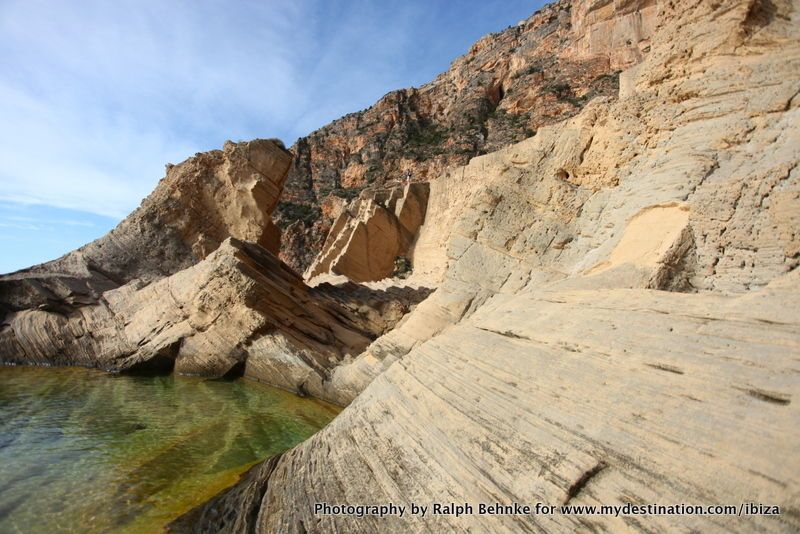 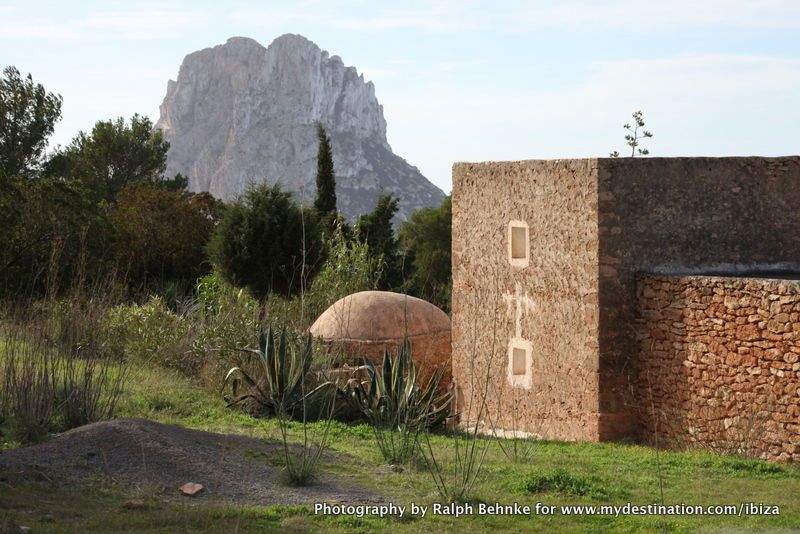 With the group growing restless, having finished their snacks and watered the dogs, we turned our attention to the climb back up.  It only took a half hour to get everyone back up and back to the cars but it sure felt longer.  Definitely wearier than when we started out and, with our hunger for adventure calmed for the moment, it was time to head off for some food, wine and beer - or in my case photographing horses on a Beach ride in Port San Miguel. But more on that adventure another time.